Welcome to the beginner’s course of beer brewing

We have all the basic ingredients of beer – water, hops, malt and yeast – available to start brewing. The final brewing result depends on the specific procedures, fermentation periods, temperatures etc. We would like to guide you through the basic steps of the brewing process.

At Kasteel Brouwerij Vanhonsebrouck we brew beers of high, spontaneous and mixed fermentation. The difference between the types of fermentation will also be discussed in this beginner’s course. 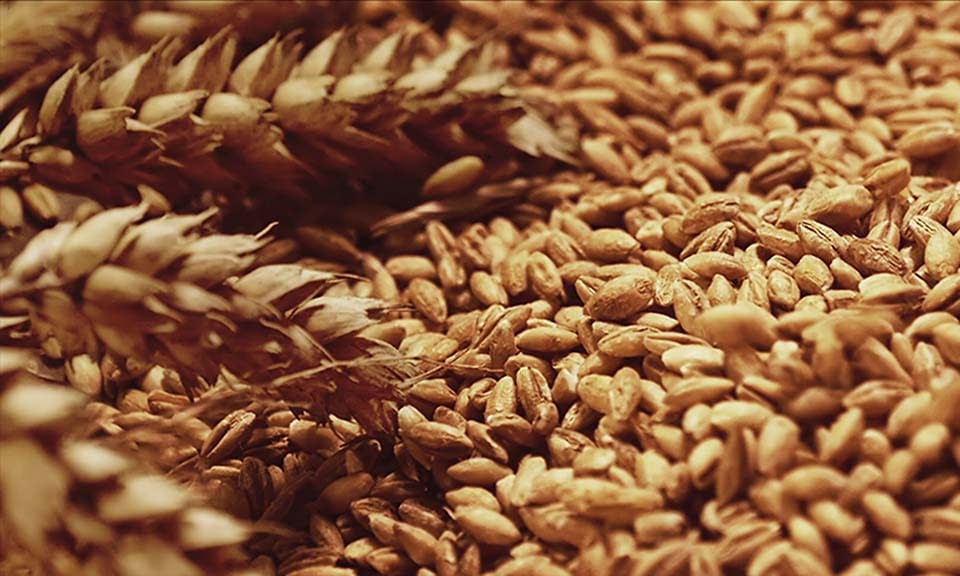 The brewing process starts already outside the brewery walls with the malting of grain. Malting is a crucial stage in the production of beer. Barley is mainly cultivated to brew beer, but other grains such as wheat, rye or oats can also be turned into malt as the basis for beer. The malting process starts with cleaning and soaking the grain in water to germinate followed by kilning (or drying) the malt at a high temperature. Kasteel Brouwerij Vanhonsebrouck buys its malts from domestic and foreign malt houses carefully selected and strictly inspected.

When choosing malt, we are very critical because the malt is important for the colour, aroma and flavour. Once arrived at the brewery, the malt must be milled to form the grain mixture called “grist”. This way, the granules will break and the starch can be released. The resulting grist is mixed with hot water in the mash tun to convert the starch into fermentable sugars. The starch dissolves in the mash tun and the resulting liquid is separated from the spent grain. 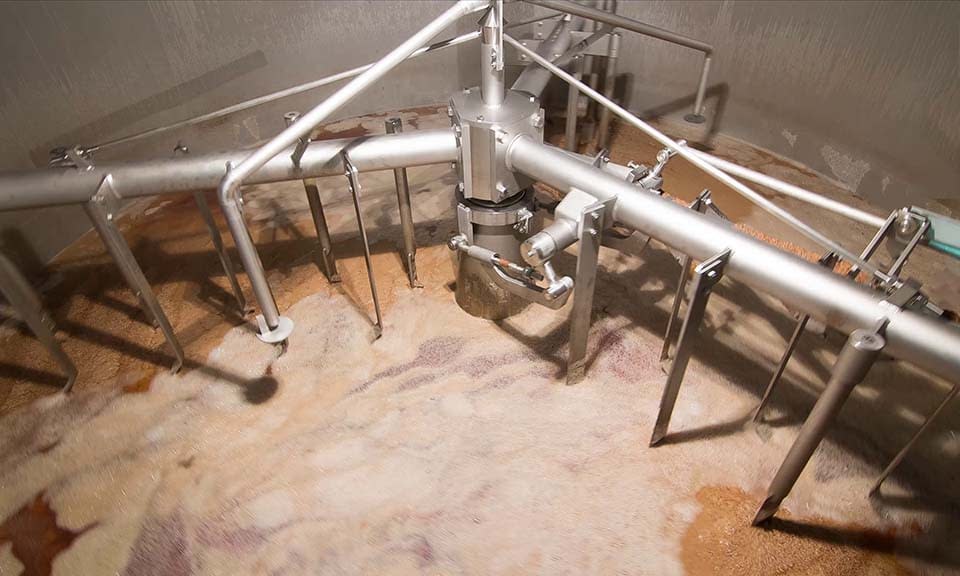 Mashing consists of mixing the coarsely crushed malt and water in a mash tun. Both the quality and the flavour of the water must be optimal. That’s why the water composition is extremely important for brewing our beers.

During the mashing process we mix the water and the malt. In this step of the process, the starch in the malt is converted into fermentable sugars. Temperature plays an important role in activating natural enzymes in the malt to convert the starch into sugars. The amount of time heating the malt affects the composition of the wort. In this way, it also influences the fullness and the foamy head of the beer. 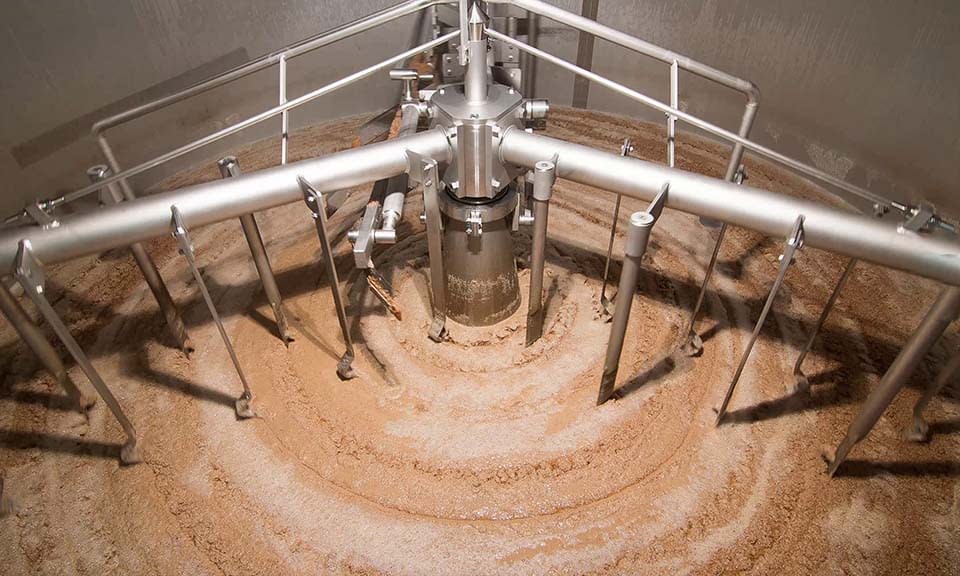 After the mashing process, a sugary liquid and the spent grain of the malt remains. In the next step of the brewing process, all the grains and liquid are transferred to the lauter tun. During lautering we separate the sweet liquid from the grains. After the filtering is done in the lauter tun, we keep the spent grain temporarily in silos. After they are collected and distributed among dairy farmers. The legal distribution of spent grains that are generally used as cattle fodder is possible thanks to the FCA certificate.

The sugary liquid after filtering is called wort. This sweet liquid will soon become beer. 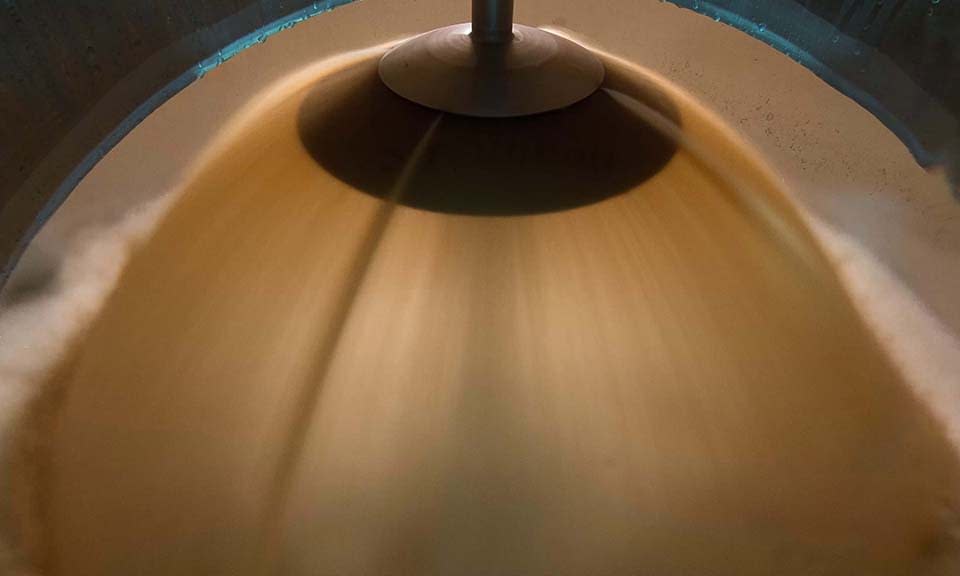 Boiling serves to sterilise the wort, to concentrate it, and to separate out the wort from the so-called “hot break” (the brown scum that forms on top of the wort as boil approaches). The wort is pumped into the boiling kettle where the hops are added to give beer its bitterness and specific aromas. Meanwhile, we also add hops and spices. We only use hop cones of the female hop plant. Boiling largely dissolves the hops into the wort and gives it its bitter aromas and flavours. Therefore, the brewer usually starts with bitter hops that contains bitter substances to give the beer its typical bitterness. Aroma hops are added towards the end of the boiling process. The hops for our beers come from everywhere. For example, we use mild Golding hops from Poperinge for our Kasteel range. For Brigand we use Saaz-hops from the Czech Republic. 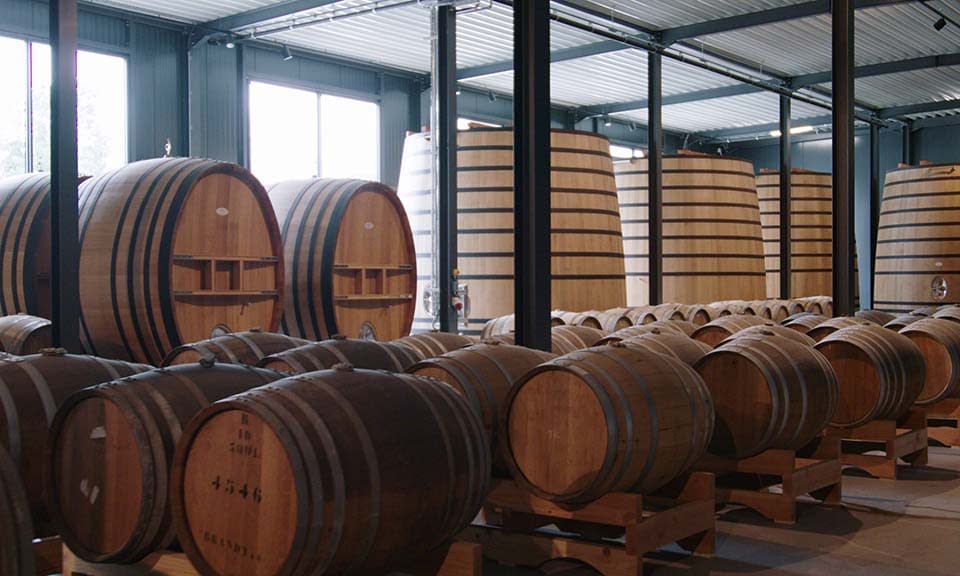 During the fermentation process, the fermentable sugars are converted into alcohol and carbon dioxide. At a high temperature, fermentation takes 1 to 2 weeks. During the conversion process many aroma components are released. We can only talk about beer after all the sugars have been converted. We use three types of fermentation: 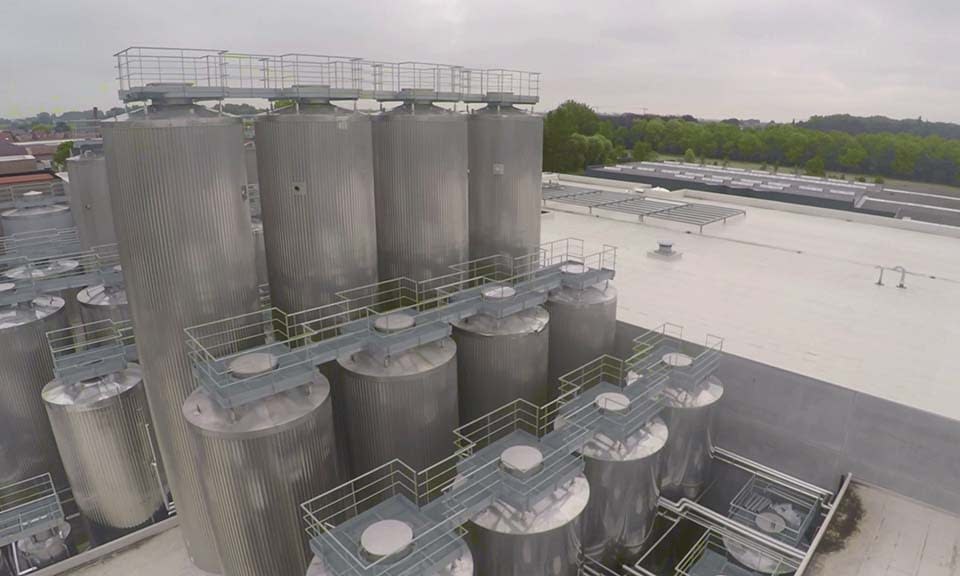 Once the main fermentation is finished, the yeast is separated from the beer. The beer is then transferred to storage or lager tanks for maturation. During the ageing or lagering process, the yeast sinks to the bottom, the remaining sugars are converted into specific aromas and less pleasant flavour components disappear. Lagering creates balance in the beer so that the flavour will remain stable. When necessary, the brewer adds extra elements.

For our fruit beers we add fruit in this step of the brewing process. During the 6 month lagering period the flesh of the fruit completely dissolves and the flavour of the fruit is absorbed into the beer. For Kasteel Hoppy the brewer applies the dry hopping technique. He adds extra hops during the lagering process which gives a subtle hop aroma and a subtle bitterness. 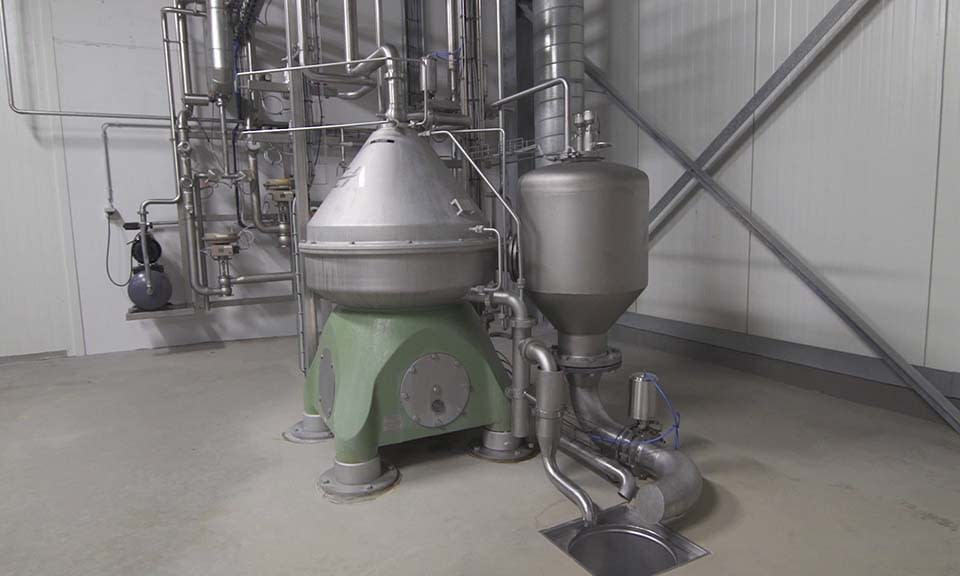 Filtering is required for a second time during the brewing process. This is necessary to remove the remaining yeast cells and cloudiness from the beer. The excess yeast is kept in silos until they are collected by an authorized distributor. Yeast contains a lot of vitamins for pigs and can therefore be used as pig feed. Kasteel Brouwerij Vanhonsebrouck is legally allowed to distribute the yeast thanks to the FCA certificate.

This phase of the brewing process is very important for our gueuze and fruits beers. This is the moment when the brewer prepares a blend of old and young lambic before bottling. 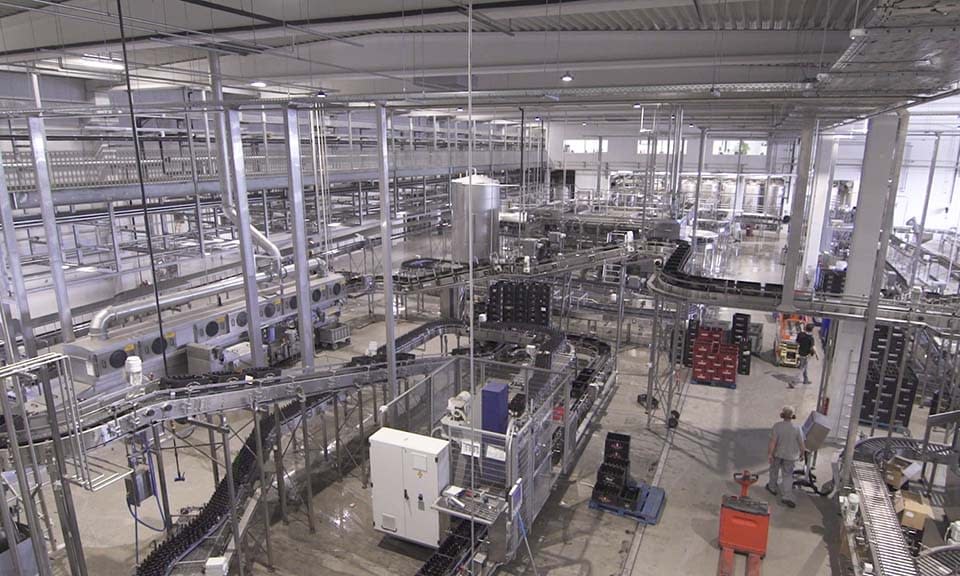 It’s time to bottle the beer. Kasteel Brouwerij Vanhonsebrouck has its own bottling plant, where the beers are bottled under the strictest hygienic conditions. The beer can be bottled in barrels, bottles or cans.

Our brewery has five beers with refermentation in the bottle: Filou, Kasteel Tripel, Brigand, Kasteel Hoppy and Kasteel Blond. Before bottling, the brewer adds sugar and active yeast. After bottling, our beers can referment in a warm room of a maximum of 23 degrees Celsius. 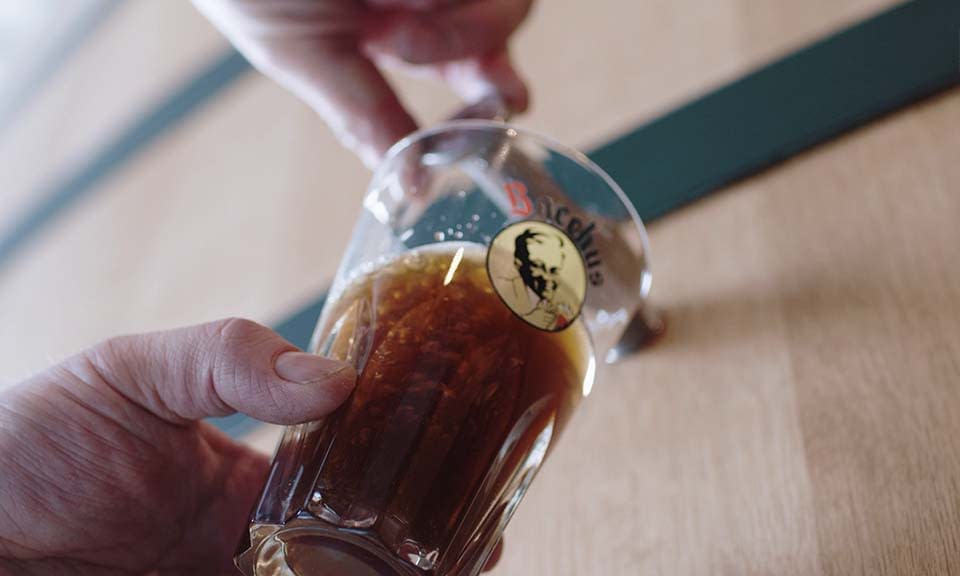 The brewing process is completed and now it is of course time to taste the beer! Does the beer have enough bitterness? Do the fruit aromas stand out sufficiently? These questions can only be answered at the end of the brewing process. Once approved, the barrels, bottles and cans of beer can be sold to the consumer.

You too – beer lover par excellence – can now judge and enjoy the beer. We hope that the foamy head is a treat for your eyes, that the bitter aromas can titillate your nose and that the subtle flavours unique to our brewery can caress your tongue. Only when you are satisfied, we are too!