Hit enter to search or ESC to close
Blogpress

Kasteel beer has been in existence for thirty years – and we’re celebrating that! Until the end of this year, we’re giving our Kasteel Donker, Kasteel Tripel and Kasteel Rouge a festive sleeve. And to make the celebrations extra special, we’ve also added a new member to the Kasteel family.

We all need something Xtra

To mark ‘30 years of Kasteel’, we’re launching a new speciality beer that truly brings out the highlights of Belgian beer culture. Kasteel Xtra has a low alcohol value (4.5%), making it very accessible. For this blonde top-fermented beer, our brewer combines extra tasty malts with a generous dose of bitter and aromatic hops. Dry-hopping and the secondary fermentation in the bottle give it an extra mild aftertaste.

“Kasteel Xtra is our response to the trend for session beers that are currently enjoying great popularity in the United States. Likewise over here, demand is rising for a speciality beer with low alcohol but nonetheless full flavour,” explains CEO Xavier Vanhonsebrouck, who has been part of the family brewery in Izegem for thirty years.

Beer sommelier Ben Vinken has his verdict on Kasteel Xtra ready: “It has a lovely hoppy aroma and is a great thirst-quenching, no-nonsense beer – a worthy alternative to Kasteel Blond or Kasteel Hoppy.” 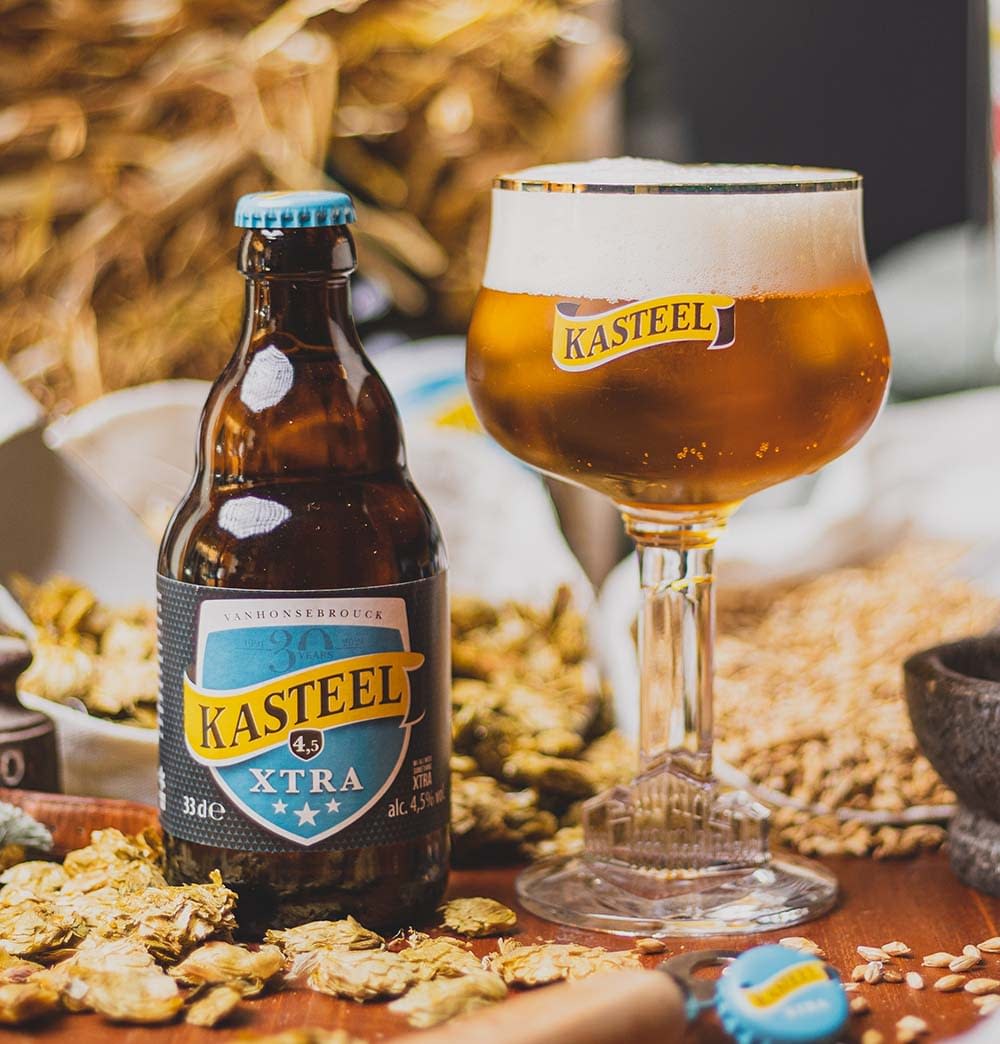 A Kasteel for every type of beer lover

Are those two Kasteel beers being dropped from the range now? “That’s right. The launch of Kasteel Xtra gives us a new blonde beer with a lower alcohol content than Kasteel Blond (7%). Kasteel Hoppy is also disappearing. In a market where beer geeks love very hoppy beers, our Hoppy was not hoppy enough. So we decided to focus on four Kasteel beers: a quadruple, a triple, a rouge and the new Xtra. That way, we have a Kasteel for every beer fan,” explains Xavier.

To mark thirty years of Kasteel, we’ve also designed a celebratory label for our bottles. Printed above the shield is the number of years that the Kasteel brand has been in existence. Below the shield and the name of the beer, we’ve added three stars.

“Each of the stars symbolises a decade of Kasteel. The stars will continue to adorn the beer label after this anniversary year,” says Xavier. 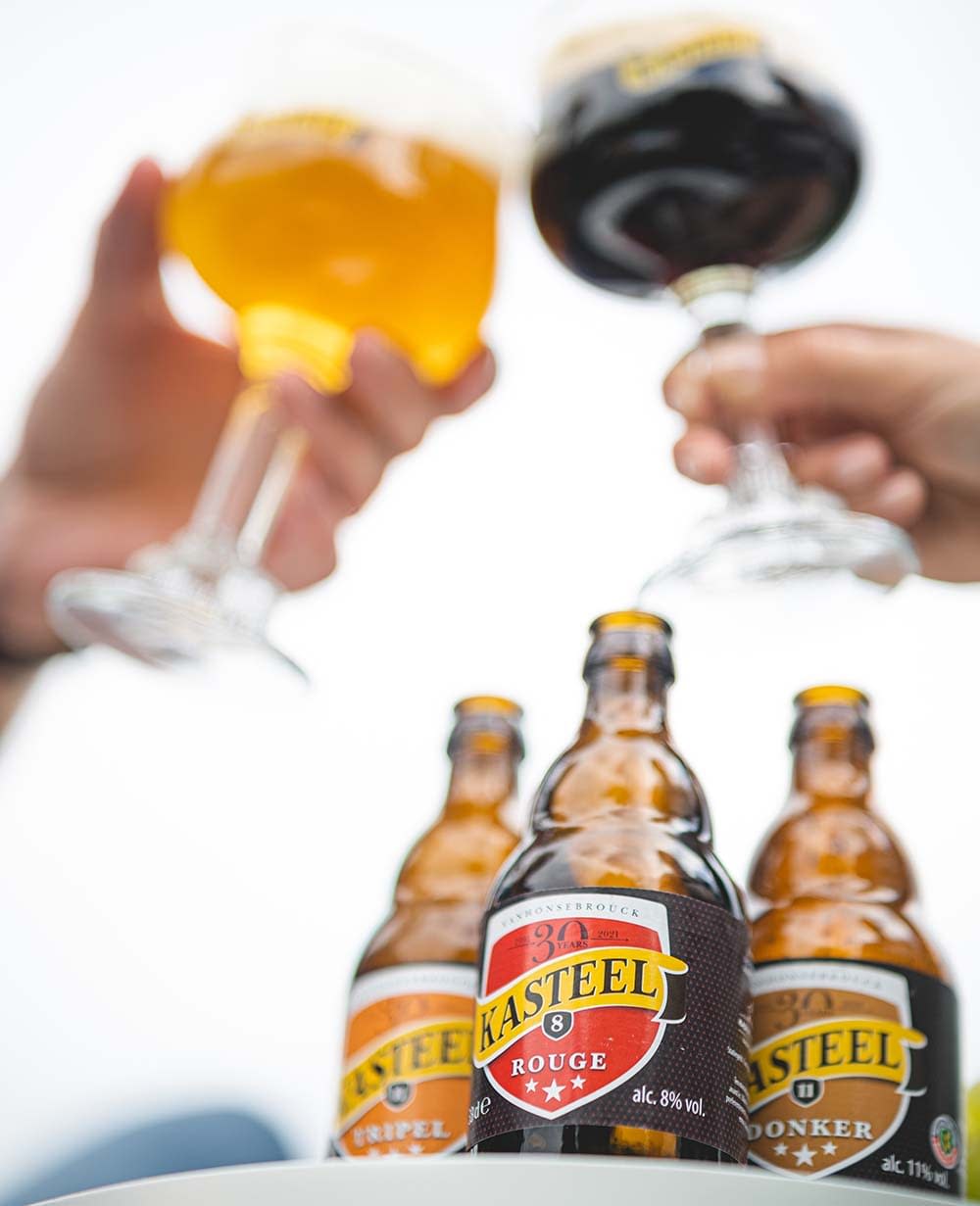 A stone’s throw away from our modern brewery, history was being written thirty years ago. At Ingelmunster Castle – the eponymous Kasteel – the late Luc Vanhonsebrouck brewed the very first Kasteel beer in 1989.

“The first Kasteel beer was dark, had 11% ABV and no head at all. It was only available in 75-cl bottles and there was just one place it was sold: Ingelmunster Castle itself. My father was hoping for queues to equal Westvleteren Abbey”, confides Xavier.

On 1 July 1991, Xavier became the fifth generation to work in the brewery. His first task? A complete rethink of the Kasteel beer marketing strategy. “We put the dark Kasteel beer into 33-cl bottles and purchased new crates and attractive beer glasses to emphasise the richness of our beer.”

Xavier also arranged for new beer mats and billboards to be designed, and came up with a bonus system for the reps. “The system worked and we soon had Kasteel beer successfully established on the market. We also became a shirt sponsor for Belgian football club Eendracht Aalst. In the 1993–1994 season, the team reached third place in the premier league. We had the whole country on our side!”

The young brewing enterprise’s strategic decisions established Kasteel beer in the existing beer landscape. But not one to rest on his laurels. In 2007 Xavier launched Kasteel Rouge – now a firm favourite among the Kasteel range.

“We had actually launched the beer earlier under the name K8 in a bottle with a red sleeve. However, it was ahead of its time then and didn’t win success. In 2006/2007, though, I had the feeling that the market was now ready for a dark cherry beer.” We had a brainstorming session and changed the name to Kasteel Rouge and it was a roaring success.

Nowadays there are numerous rouge beers in the beer world. “We opened up a whole new beer segment with Kasteel Rouge. It’s a credit to us that a fair few brewers have now launched their own rouge beers.”

Only one can be the first and the best. “We use Kasteel Donker as the basis for our Kasteel Rouge. Our quadruple is already a speciality in its own segment, thanks to its pleasantly sweet taste. This is the basis that gives our Kasteel Rouge its strength and makes it popular with a wide variety of beer aficionados around the world”, explains Xavier.

Kasteel Xtra will have a place in the new ‘Extra’ beer segment. 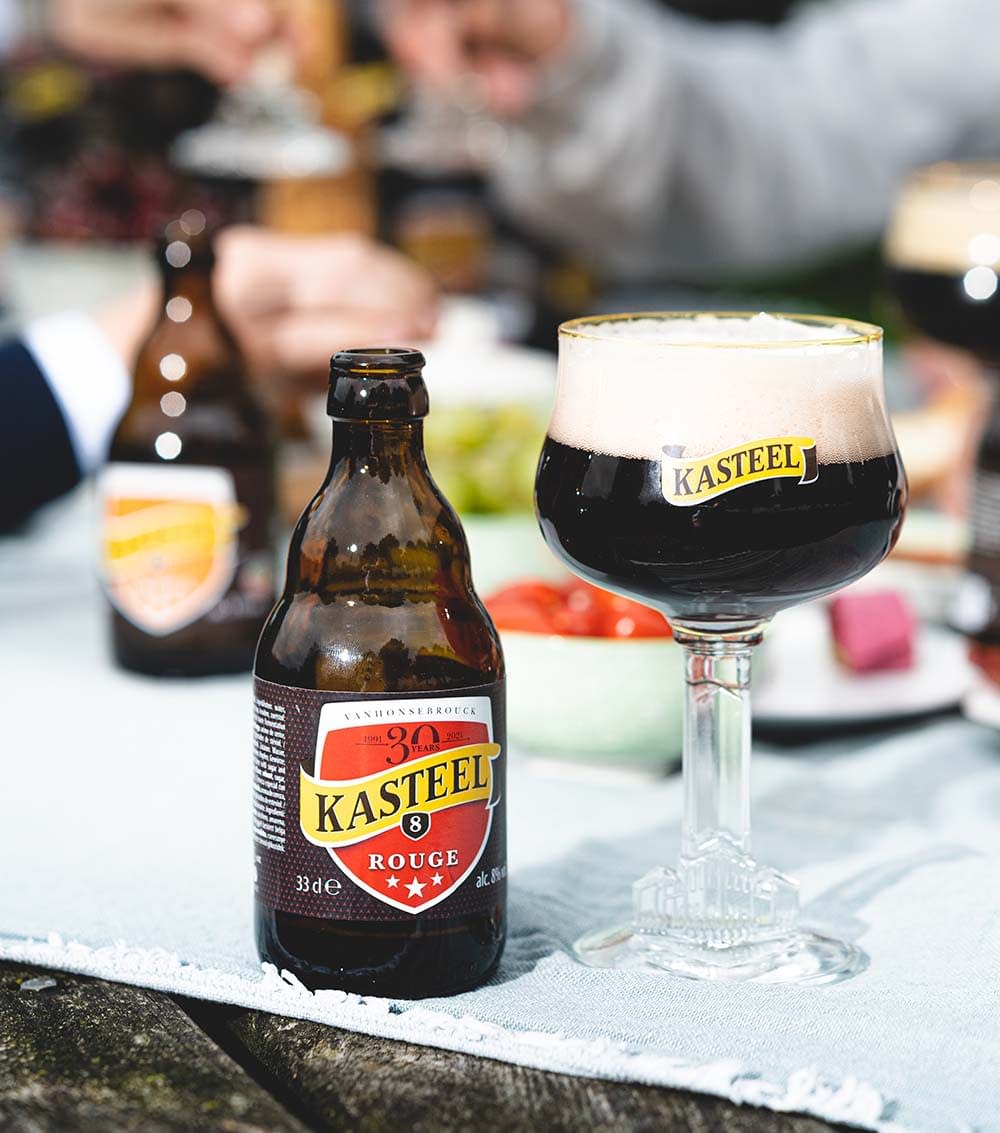 Xavier believes that, just like Kasteel Rouge, Kasteel Xtra will become part of a new beer segment: “Extra will join Westmalle, St. Bernardus and similar beers to form a new segment”, he explains in Bierpassie magazine.

The brand-new Kasteel Xtra is available to buy in supermarkets or drinks stores. Give it a try and judge for yourself! 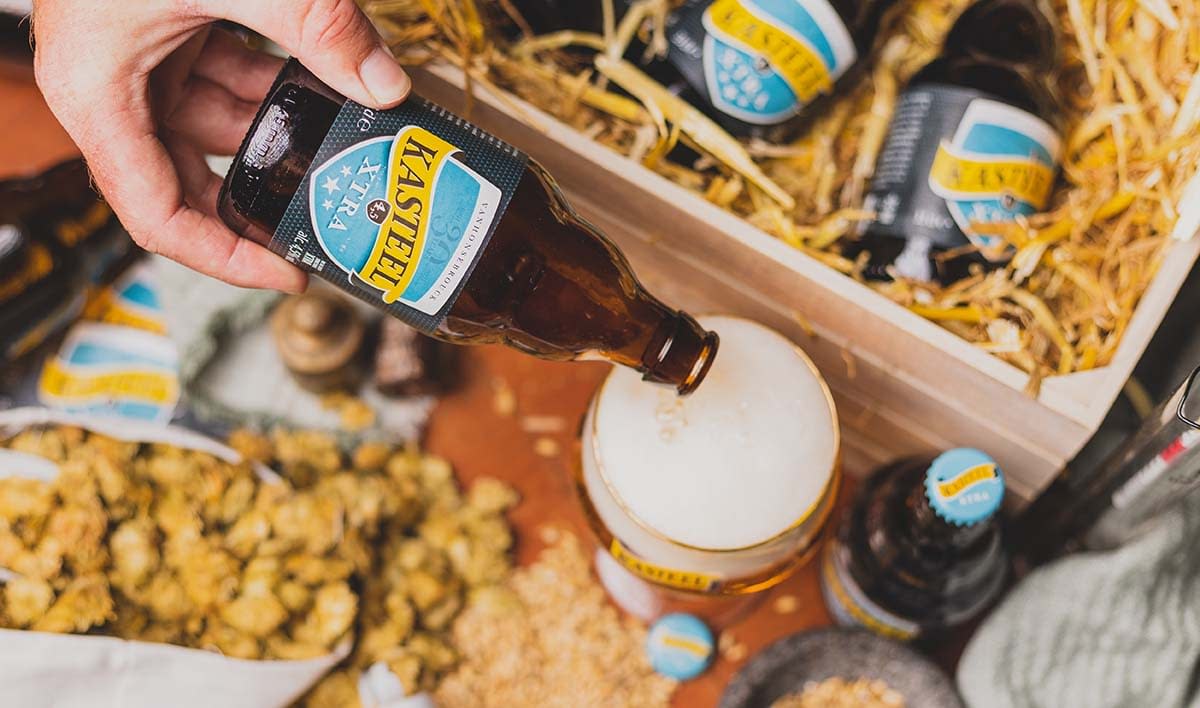